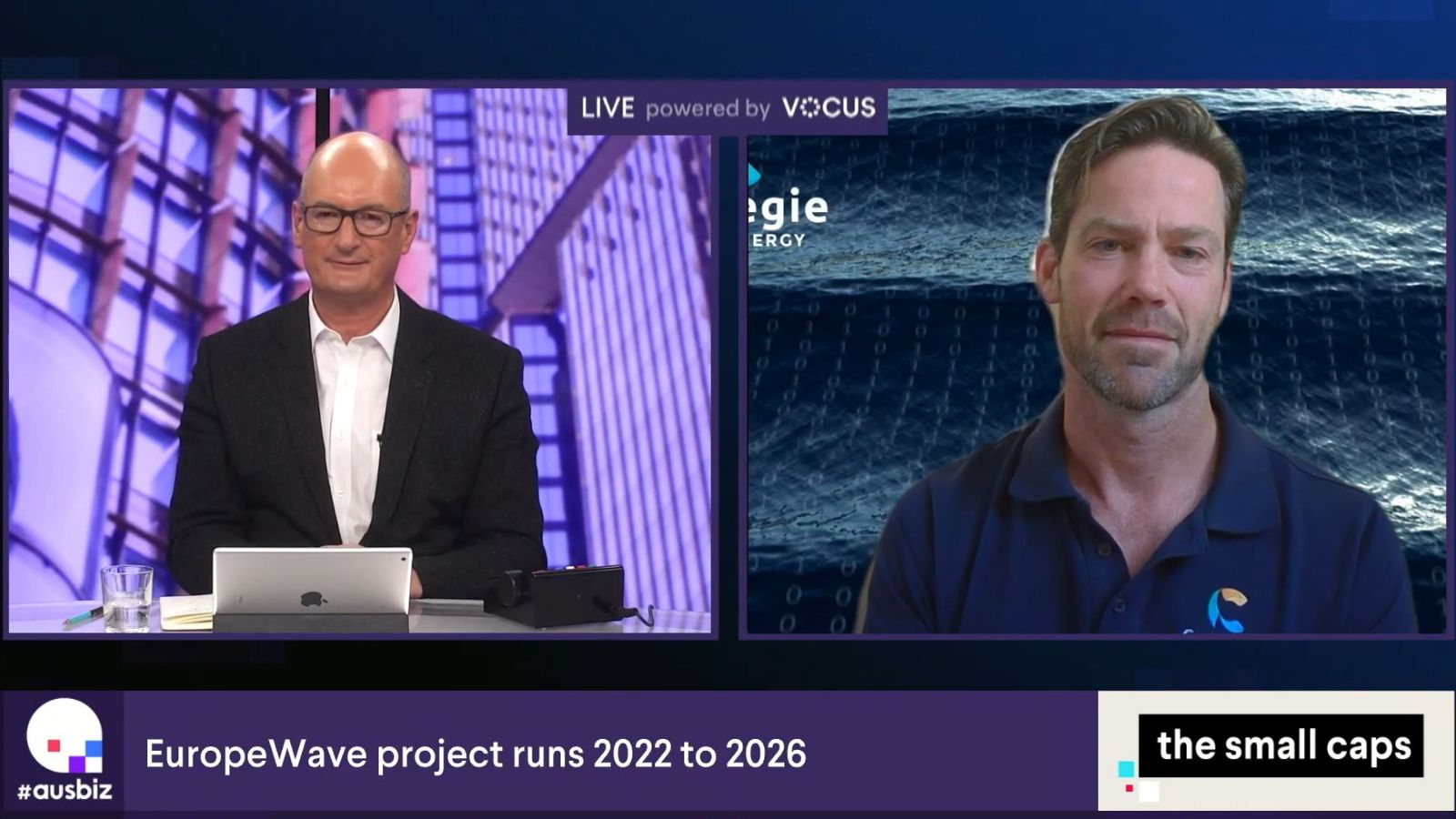 Carnegie’s CEO Jonathan Fievez has featured in the ausbiz small caps segment with host David Koch to talk about the company’s recent contract award for Phase 2 of the EuropeWave program.

Tune in from just after 12 minutes for the segment. Click here to watch.

Carnegie, via its wholly owned subsidiary, CETO Wave Energy Ireland Limited, has been selected as 1 of 5 contractors to deliver Phase 2 of the €20m EuropeWave Pre-Commercial Procurement (PCP) Programme, a competitive programme to advance wave energy.

This follows the competitive selection and successful performance of CETO in Phase 1 of the programme.

CETO Wave Energy Ireland Limited was selected alongside four other companies, out of the initial seven that delivered Phase 1, to deliver Phase 2 of the programme.

Rigorous evaluations were carried out to progressively select the best of the competing solutions. This selection shows the potential for the CETO technology to be a frontrunner in the European wave energy space. Positive feedback was received in areas such as the techno-economic optimisation, approach to system performance, advanced control, levelised cost of energy (LCOE) mod modelling and forecasts, proposed activities, risk management and a strong and capable project team.

Following the completion of Phase 2, three of the five companies will be selected on competitive basis to continue to the final Phase 3, which includes deployment in open sea conditions at the Biscay Marine Energy Platform (BiMEP) in the Basque Country or the European Marine Energy Centre (EMEC) in Scotland. The final phase is expected to start in September 2023 and conclude in May 2026.

CETO Wave Energy Ireland will deliver Phase 2 of the EuropeWave PCP with the support of an impressive team including its consortium partner SAITEC Offshore Technologies and subcontractors Hewlett Packard Enterprise, Hutchinson, DNV (including support from Yavin Four Consultants), IHCantabria and Julia F. Chozas Consulting Engineer. All the Phase 1 partners will continue to be involved and are being joined by new project partners, Hewlett Packard Enterprise who will be involved in the reinforcement learning based control and Hutchinson, who will be involved in the design and testing of the belt component of the power take-off system.

A wave tank testing campaign will be undertaken at the Cantabria Coastal and Ocean Basin (CCOB) in Spain in early 2023. The tests will build on previous tank testing undertaken during Phase 1 and will validate the performance of CETO’s advanced controllers and confirm a novel survival strategy, key advantages of the CETO technology.

A Power Take-Off (PTO) bench testing campaign will occur in early 2023 and will validate the fatigue life of the belt and characterise the efficiency and reliability of the PTO drive train, controller and electrical system. This work will be done in collaboration with the IMPACT project, which is developing test rigs that will be utilised by the team. Carnegie will retain ownership of the intellectual property rights (IPRs) generated during the PCP Programme and will be able to use the IP to exploit the full market potential of the developed solutions.

EuropeWave PCP is an innovative and competitive stage-gate programme designed to advance promising wave energy converter systems to a point from which they can be developed for commercial exploitation through other national/regional programmes and/or private investment.

With almost €20 million in funding for the 3 phases of the programme, the EuropeWave PCP is a collaboration between Wave Energy Scotland (WES), a subsidiary of the Scottish Government’s Highlands and Islands Enterprise, and the Basque Energy Agency (EVE).

The EuropeWave project has received funding from the European Union’s Horizon 2020 Research and Innovation Programme under grant agreement No 883751.

Carnegie was up on the big screen at HPE Discover 2022 this week, one of the biggest conferences in the technology calendar.

Click here to watch HPE’s Paolo Faraboschi talk about the work we are doing to revolutionise wave power with AI.

The three-day conference was held in Las Vegas, Nevada 28-30 June.

Carnegie held a place on the conference floor, showcasing the work being done under its collaboration agreement with Hewlett Packard Enterprises on Reinforcement Learning-based controllers.

CETO was on display in the interactive HPE wave tank, demonstrating its ability to adapt and operate in different wave conditions.

Hewlett Packard Enterprises recognises that the complex nature of waves and the extremes of an ocean environment make designing an optimum energy-capture device a complex challenge.

Ocean waves carry enormous supplies of consistent clean energy and with reinforcement learning-based AI, CETO can optimally extract energy from each and every wave.

Together with HPE, we are using their supercomputers to study the rhythms of nature, and how they could unlock unlimited supplies of clean energy. 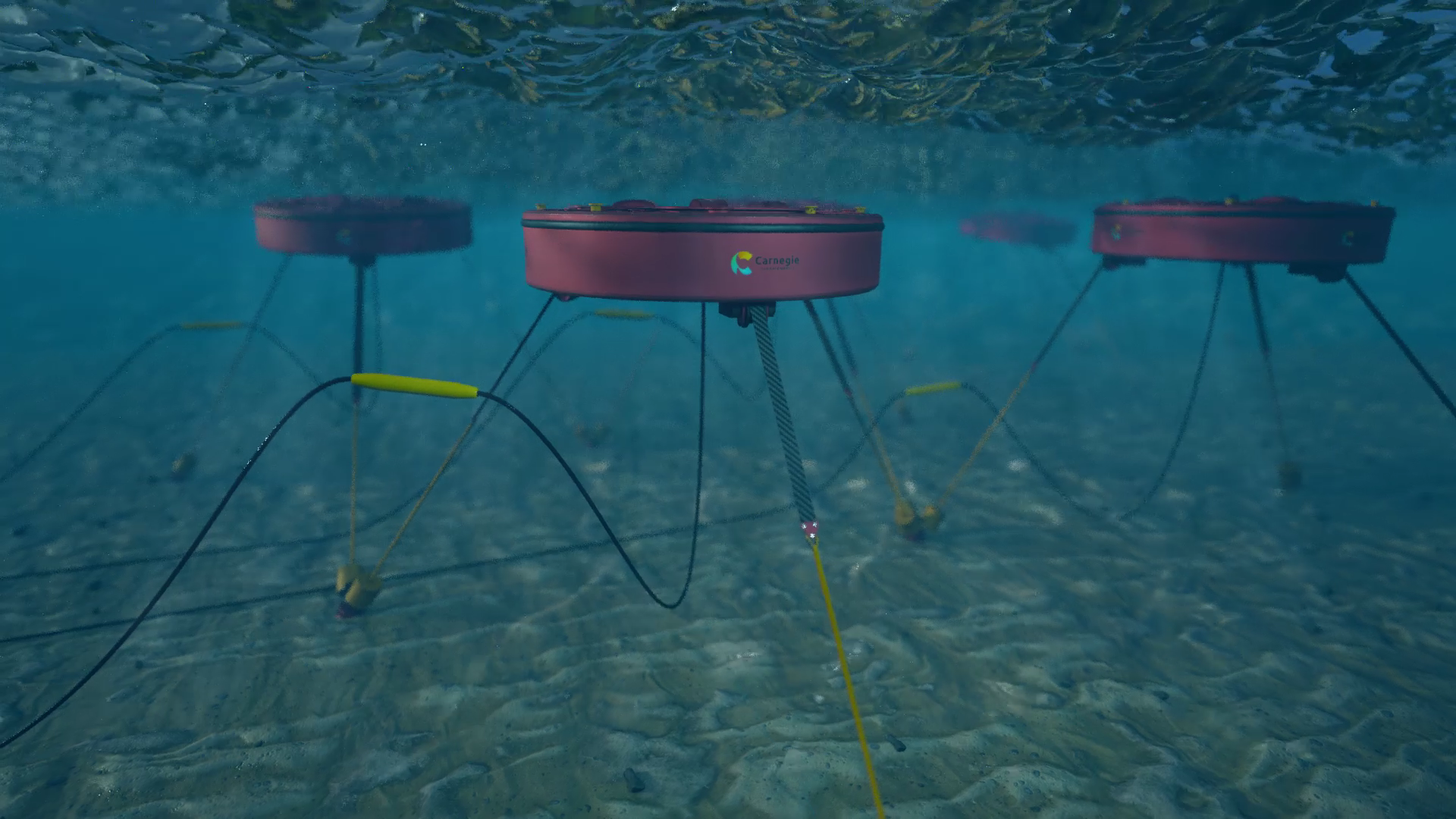 Carnegie is pleased to announce that its Digital Development Pathway has achieved its commercial target, through the cost and performance improvements of CETO.

These improvements have reduced CETO’s timeframe to commercialisation, making its pathway comparable to the historical progression of solar PV and offshore wind.

The completion of the Digital Development Pathway signals the escalation of commercialisation activities.

This is a key milestone and showcases how, with deployment, wave energy can become a commercially competitive and widely adopted technology.

The work undertaken has delivered a step change improvement in cost and performance which will place CETO in a strong position on the industry pathway to provide commercially attractive offerings to customers. Carnegie has been able to deliver up to a 30% increase in simulated energy capture performance with its industry partners, alongside projected improvements in reliability and operational efficiency.

The work conducted is expected to accelerate the uptake of CETO over the coming years by bringing the technology down the cost curve sooner, making it increasingly attractive to global markets.

As the technology progresses along its commercialisation pathway, and the cost of energy decreases further, Carnegie envisages the addressable market for wave energy to expand, creating a growing adoption curve previously seen in the solar PV and offshore wind market expansions.

Carnegie was invited to present and speak at three ocean energy events held in Hobart, Tasmania.

Our Chief Commercial Officer, Brighid Jay, delivered a presentation during the developer showcase talking about Carnegie’s suite of products and the various market needs they address.

While over at the 2022 Tasmanian Salmon Symposium our Chief Technology Officer, Alexandre Pichard, went through the MoorPower™ spin off product during the technology and systems for future panel. The symposium provided Carnegie the opportunity to speak with Australian salmon market representatives and industry leaders about how our novel wave converter systems can be used in offshore energy demand applications, such as feeding barges in the aquaculture sector. Learn More

Carnegie CEO Jonathan Fiévez featured at the Blue Economy CRC Annual Participants Meeting, delivering a presentation and speaking on the panel about our perspective on the future of a sustainable blue economy. To wrap up the week Brighid presented on our projects to decarbonise energy systems in marine industry.

The roadshow to Hobart also provided Carnegie with the opportunity to visit Tassal’s feed barges and get a hands-on experience of how Carnegie’s technology will be operating in the field in the near future through the MoorPower™ project in collaboration with the Blue Economy CRC.

Carnegie, via its wholly owned subsidiary, CETO Wave Energy Ireland Limited, has been selected as 1 of 7 contractors to deliver Phase 1 of the €20m EuropeWave Pre-Commercial Procurement (PCP) Programme, a competitive programme to advance wave energy.

Carnegie has been awarded €291k (A$463k) for Phase 1 to deliver a CETO tank testing campaign and a CETO concept design for sites in Scotland and the Basque Country, subject to contract signing. Phase 1 will commence on 3rd January 2022 and run for 7 months.

The EuropeWave project has received funding
from the European Union’s Horizon 2020 Research and Innovation Programme under grant agreement No 883751.

With almost €20 million in funding for the 3 phases of the programme, which runs from 2022 to 2026, the EuropeWave PCP is a collaboration between Wave Energy Scotland (WES), a subsidiary of the Scottish Government’s Highlands and Islands Enterprise and the Basque Energy Agency (EVE).

Europe and the UK are driving forces behind the adoption of wave energy with several investments and support mechanisms underway. EuropeWave PCP’s objective is to accelerate the development of cost-effective wave energy converter systems that can survive in the harsh ocean environment, and ultimately EuropeWave PCP will contract three of the Phase 1 contractors to deploy their prototypes at BiMEP or EMEC in Phase 3.

The selection of subsequent Phase 2 (€600k) and Phase 3 (€3.75m) EuropeWave PCP contracts will be based on competitive selection within the contractors.

The contract is a strong third-party validation of CETO’s technical and commercial potential and strongly aligns with the Company’s strategic objectives.